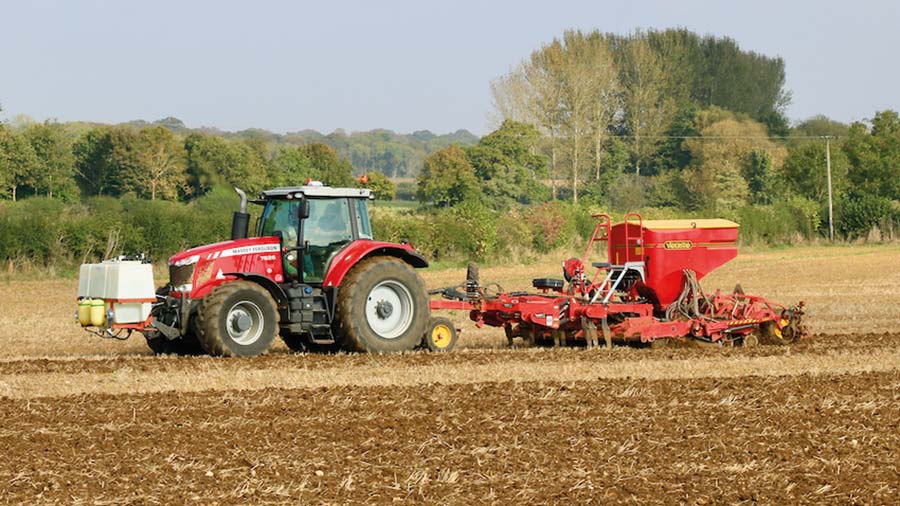 Why the Reborn Farmer Opted for a Non-Break Crop Rotation

A wheat/wheat/fallow rotation may not be on the minds of many growers, especially those committed to moving a business towards a more regenerative approach.

But assuming this season’s trial is a success, that’s the direction an Oxfordshire farm is heading.

The rotation envisioned by Ben Adams – who cultivates 400ha of arable crops, plus around 100ha of grassland with his parents, near Bicester – is not as simple as it seems, however.

See also: Regenerative agriculture: what to avoid and where to start

“The idea came about because there are no disruptive cultures worth cultivating,” he says.

“In 2020, spring flaxseed performed very well, achieving our second highest gross margin behind winter wheat. But in 2021, it was catastrophic.

“So I want to go back to a wheat/wheat/fallow rotation, but do it better.”

This means that a winter wheat crop will be followed by a winter cover crop, before spring wheat – chosen over spring barley because of its harvest date – followed by a complete with legumes.

If conditions allow it at the end of October/November, a second winter wheat would be sown in place of the spring wheat.

The entire crop – a mix of oats, winter beans, winter vetch and crimson clover – will be harvested in early June before any foxtail seeds by two beef producers with whom Mr Adams has entered into straw for mud.

He hopes the mud can be applied to this land during the drier summer months, when there is less risk of leaching.

Other practices used or tested on the farm

A summer cover crop will be established after a low disturbance subsoiler has been used to rectify any soil damage from harvesting the entire crop and manure spreaders before a wheat crop is directly sown in the cover.

Finding a consistent way to incorporate a summer cover crop into the rotation after seeing the amount of insects and biological activity present after they established in flooded fields last winter is another deciding factor.

“The only problem we might face is that according to agricultural rules for water, a summer cover crop has no nitrogen requirement, so we might have to grow a corn crop with multiple companions because the corn has an N [nitrogen] requirement.”

The combination of whole-crop legumes, barnyard manure and summer cover crops should significantly reduce the need for synthetic nitrogen applied in the wheat crop, he believes.

Another consideration for changing the rotation, notwithstanding the potential benefits of reduced inputs and improved soil health, is to improve logistics and spread out the workload on the farm.

For the past two years the farm has been overstaffed with Mr Adams returning from a post-graduate trip and unable to take up employment off the farm due to Covid, adding to three full-time staff, including his dad.

But that all changed this fall, with Mr Adams starting full-time work with Laurence Gould and another staff member leaving the farm.

Moving to the new rotation will simplify operations and reduce bottlenecks in operations at key times (see “Operational Calendar”).

Financially, he aims to break even with the mix of whole crops and summer cover crops and use both wheats as cash crops.

“We will have to spread our fixed costs over a smaller area, but the variable costs should also decrease.

“Based on a rough budget calculation, the new £/ha rotation gross margin should be about the same as the current rotation. I also want to see how this compares financially to the AB15 campaign stewardship option.

“That’s my big plan, but I don’t know if it will work, so we’re testing a field for each of our two cattle neighbors to see if they like the full crop and how it works.”

A trip organized by the Institute of Agricultural Management to Jake Freestone’s Overbury Farms while a student at Harper Adams University was the inspiration behind Ben Adams’ desire to change the farming philosophy at home.

Understanding the potential savings from direct drilling and the broader reduction in inputs that Mr. Freestone was realizing was instructive, he says.

But visiting the farm, then reading regeneration books and listening to podcasts, also highlighted the environmental benefits of this approach.

“It has gone from being a profit-making exercise to being able to run a sustainable business with environmental benefits.”

Profitability remains crucial, he stresses. “As the saying goes, you can’t be green if you’re in the red. But if you can be profitable while providing environmental benefits, why wouldn’t you? ” he asks.

Since leaving college, Mr. Adams has transitioned from farming with his father to greater use of regenerative principles. “Little by little, we became a little braver.”

The use of cover crops has been extended before all spring crops in the current rotation winter wheat/spring wheat/winter beans/winter wheat/spring flax or peas, the species mix moving from black oats and vetch to a multispecies mix suitable for the next crop is a cereal or broadleaf break crop.

Cover crop costs are reduced by using a mix of around £20/ha of purchased seed and £5/ha of home-saved oat, flax and pea seed, which make up around 50% of the mixed.

“You can spend so much money on cover crops so easily, but it has to make financial sense.

“We earned around £13/ha from grazing last year, but cattle can damage the soil if left too long. We want the sheep to reduce biomass, start to decompose and recycle green matter rather than leaving it too long for a few extra pounds, damaging the top 2 inches and having to cultivate in the spring.

“If you are going to graze, a good shepherd is essential.”

Tillage depth on brash loam/clay loam soils was gradually reduced, with a modified Vaderstad Rapid being used for direct drilling where appropriate.

“Over the past two years, we have sold our Lemken Karat deep-tillage plow and cultivator and purchased a He-Va Stealth low disturbance subsoiler, which we use if anything needs help.

In the longer term, he hopes to use Defra’s agricultural investment fund to purchase a no-till disc seeder.

Although it is still early to assess the financial benefits of the changes made, initial calculations suggest that the use of inputs has decreased by around 30%, partly due to the increase in spring crops.

“Our next focus will be fixed costs. The loss of two full-time employees will make a difference and we will eventually go from three tractors to two.

“We’re probably also overcapacity with our combine, especially if we reduce the combined area by a third, so that’s something we’ll have to look at,” he concludes.

2022-01-14
Previous Post: This 6-year-old is the youngest certified farmer in Georgia
Next Post: Tension as farmer murdered in Anambra community