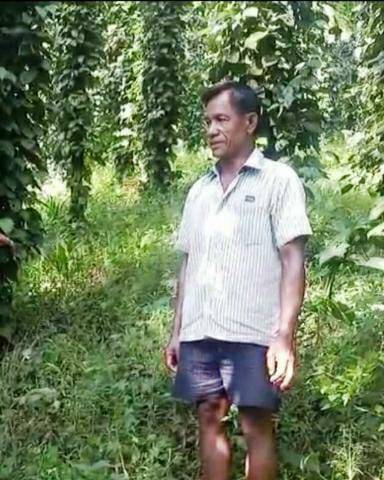 Despite the fact that India is rapidly moving from a developing to a developed country, many people believe that a large part of India’s population, which was once affiliated with agriculture, is now moving away from it. But this is not quite true.

This story concerns the state of Meghalaya in northeastern India. Today we are going to introduce you to a farmer from Meghalaya who now grows black pepper. He also earns lakhs from growing black pepper. He also received the Padma Shri Award for thinking outside the box when it comes to agriculture. Let’s see who these farmers are.

Before introducing this farmer to you, it should be noted that Meghalaya state has many innovative agricultural experiments as Meghalaya is still a predominantly agricultural state. Herbs and spices are cultivated by the majority of farmers in this region. Also, excellent monsoon showers can be found here. Suddenly, it is possible.

The name of this farmer is Nanado B. Marak, and he lives Meghalaya. His current age is 61 years old who cultivates now The cultivation of black pepper on a five acre lot. The unique aspect is that he only uses organic manure in his agriculture.

Nanado B. Marak, 61, is considered one of the first farmers of Garo Hills of Western Meghalaya. After her marriage, Nanadar acquired five acres of property from her in-laws. That is why he is currently cultivating this land. On this earth he planted 34,000 black pepper trees. He claims that at first he grew a variety of black pepper known as ‘Kira Munda’ on his farm. It is a variety of medium size.

Nanado claims he started growing black pepper with just ten thousand rupees. He used this money to plant ten thousand trees around the field. He continued to increase the number of trees year after year after seeing the income from those trees. This number has already exceeded 34 thousand. Nanado started with ten thousand and is now earning lakhs of black pepper.

He had made the decision to engage only in biological agriculture, so that pesticide-free products can reach people’s plates and their health is never threatened. As a result, its black pepper is in high demand both nationally and internationally.

In Meghalaya, where Nanado practices agriculture, dense forests are present. When he tried to develop agriculture in such a situation, forests stood in his way. He refused to cut down the trees in the forest because it seriously harms the environment. As a result, he devised a strategy to cultivate in such a way that trees could be spared and agriculture could be increased with the help of the State Department of Agriculture and Horticulture in which he still succeeds today.

Help other farmers too

Knowing these facts about Nanado, you must conclude that he is not a typical farmer. Along with technology, he continues to seek government help in every way he can. But the good news is that he is now helping all the small farmers in his district with farming. As a result, other farmers are turning to organic farming, which is a more positive indicator.

The Padma Shri is one of the highest honors one can receive in India. The Indian government has awarded Joe Nanado b. the Marak (Nanadro B Marak). This honor was bestowed upon him on the occasion of the 72nd Republic Day. His commitment to biological agriculture was also praised by the government. He has been a source of encouragement to other farmers through this honor. Let us tell you that in 2019 Nanado B. Marak made 19 lakhs from the sale of black pepper planted on his land. After that, his income continued to increase year by year.

How to grow pepper

According to Nanado B. Marak, it is essential to keep a distance of about 8 feet between each pepper plant. In addition, when the seeds are extracted from the pepper plant, they should be dried and removed with great caution. Black pepper seeds are extracted by immersing them in water for a while and then drying them. It has the effect of enhancing the color of black pepper.

What fertilizer to use

The fertilizer is used to provide energy to the plants. As a result, better quality manure must be constantly added to the plant. For each pepper plant, ten To 20kg manure is needed. Cow dung Where vermi compost manure can be used.

The machine is now the best alternative for harvesting pepper pods. The machine has the ability to break grains faster and more efficiently. For your knowledge, the beans retain 70% of their moisture content when they are first harvested. After that, it is dried and removed. Black pepper is likely to deteriorate quickly if it is not dried. Therefore, it is essential to dry it well.