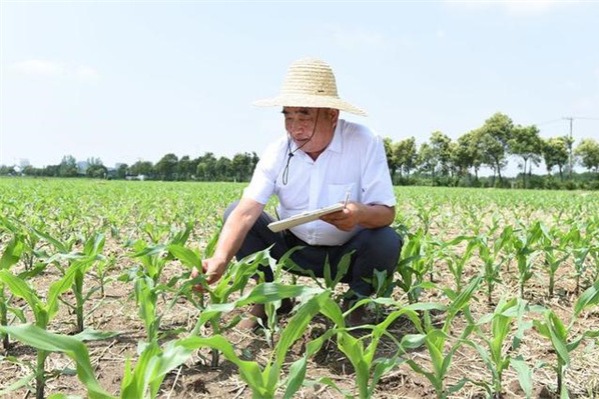 Xu Congxiang, 69, a major grain producer in Taihe County, eastern China’s Anhui Province, harvested a record harvest this year, with wheat yield from his demonstration farm exceeding 800 kilograms per mu (0.067 hectare). “In the 1970s, most of the wheat yield per mu in China was less than 300 kg, and many families did not have enough food and clothing. Now, as the cultivation technology continues to improve , our grain production multiplied,” Xu recalls.

A few decades ago, when Xu was under 20 and had just graduated from high school, he returned to his hometown and became a farmer, embarking on his journey of exploring new ways. increase grain yield through science and technology.

“At that time, there was no advanced equipment, such as an insect detector. We could only use a magnifying glass to observe the subtle changes in cultures. Some inconspicuous spots on the leaves could be a signal of reduced production,” says Xu.

During these years, Xu accumulated many notebooks containing detailed information, including the time and degree of wind and the growth status of crops.

“Especially at the wheat assembling stage, I will check the satellite cloud image every day. Only with accurate weather information can I gain the upper hand in planting,” Xu says.

With his rich experience and expertise, Xu summed up green and efficient wheat cultivation methods and promoted them to surrounding farmers.

In 2010, Xu took the initiative to establish an agricultural planting cooperative. Of the 82 hectares of its cultivated land, 20 hectares were earmarked for experimentation and the rest was used for demonstration and promotion.

Under his influence, Xu’s offspring followed in his footsteps to work in agriculture and achieved new breakthroughs. His son Xu Jian helped him cultivate high-quality grain varieties in the demonstration field. In 2019, Xu Congxiang’s grandson, Xu Xudong, also returned to the family farmland.

Today, magnifying glasses are no longer necessary for Xu Xudong’s field research. Instead, state-of-the-art equipment, such as automatic spore traps, automatic agricultural monitoring and control system, and insect monitoring system, do the job for him.