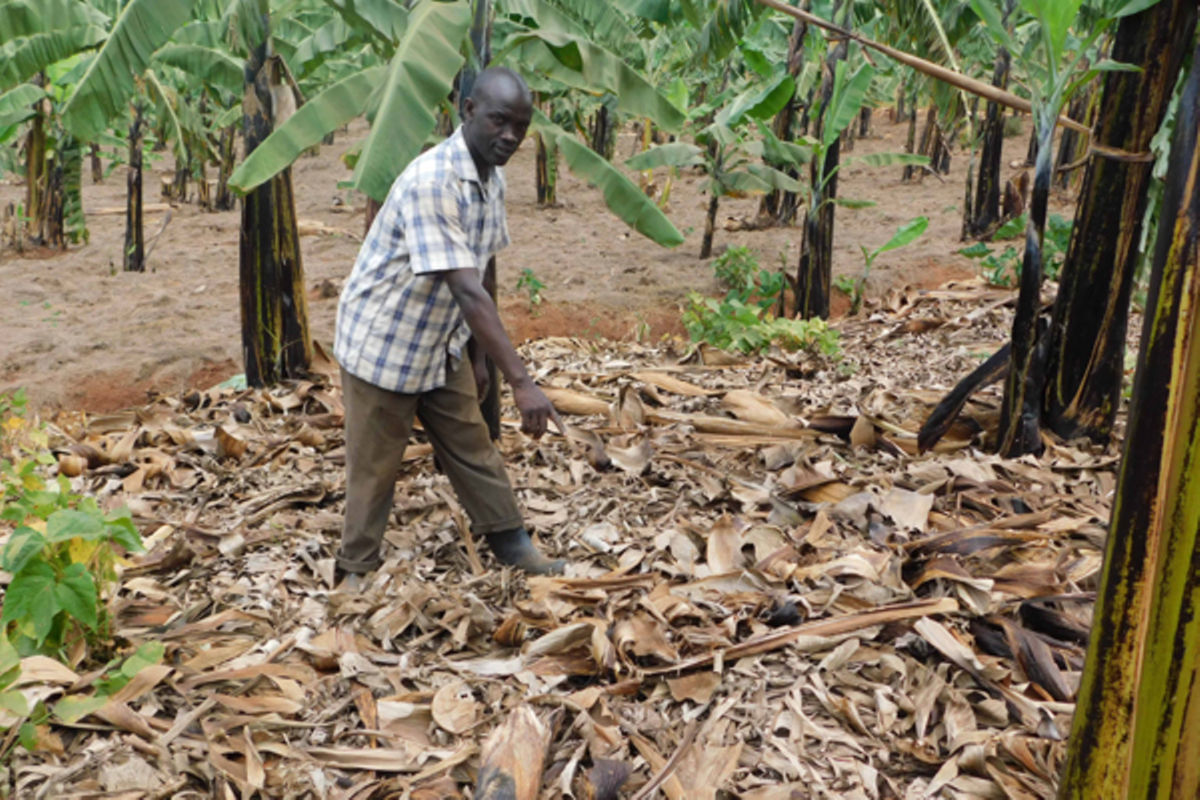 The 47-year-old farmer had no land of his own when he married in his early twenties. “I used to live with my wife in a detached house, on my parents’ property, and we used to borrow space to grow our food,” he told Seeds of Gold.

“Often we had to work on other people’s farms in exchange for food products like cassava or bananas. But today we live in a big house that belongs to us, complete with hydroelectricity and water. We are now large-scale food producers, working on our own twenty-two acres of land where we grow bananas and mangoes,” he says.

Ssemanda says that due to financial difficulties, his parents were unable to keep him in school beyond sixth grade.

“However, despite my low level of formal education, I am now a teacher because I get a lot of people who come to my farm to learn from me about banana production,” he explains.

Kitovu Mobile, an NGO founded by the Catholic Church that supports HIV victims and orphans in the diocese of Masaka, entrusted him with young orphans in his neighborhood to teach them good agricultural practices. He further revealed that most of the farming skills he shares with people who visit his farm are his own discoveries, made after many years of observation and hard work as a farmer. It was a journey of sacrifice and strong determination for him. He has a lot of praise for his committed and hardworking wife.

“We had to give up most luxuries in order to save money to buy our own land,” he told Seeds of Gold. “We used to drink tea without sugar and sometimes we didn’t even buy the tea leaves and just drank water,” he says. He remembers that in many cases, the people who lent them land asked them to leave after only a year or two. “We would get it when it was a solid bush, clear it and turn it into well-prepared soil for cultivation, but, just then, the owner would tell us it was time for us to leave,” says Ssemanda.

However, they were determined to continue farming, borrowing land and growing annual crops such as corn, beans, Irish potatoes, onions and peanuts which they sold to traders.

“We always made sure to save some of the money and over time we started buying our own land, starting with plots as small as half an acre and then buying more and more. “, he says.

He said he was lucky to have a number of neighbors willing to sell their land, which enabled him to buy up to 12 acres in total on which his banana plantation sits. He also owns three other acres, a short walk away, where he grows many bananas. Additionally, he owns nearly seven acres dedicated to growing mangoes. He is recognized as the best banana grower in Ndagwe sub-county and his well maintained banana plantation is a big attraction for most passers-by.

The plantains are all green and strong and his explanation is that the soil is well nourished. “Most of the people who sold me this land thought it was poor and infertile,” he says. “But what he lacked was the application of fertilizer. I started by mulching it with grass known locally as kalenziwe whenever I planted anything, be it onions, beans or maize. I can tell you that I reaped big yields and made money fast. Over time, I took up banana farming and never looked back. It was the grass and rotting banana leaves used for mulching that made the soil so well nourished.

Every year he has to pay for the kalenziwe grass to use as mulch. However, he also uses banana leaves as mulch. In addition to suppressing weeds, mulch eventually rots and turns into manure. He insists on good spacing which he says is about 10 feet between banana stems. He says that if the plantation is overcrowded, it is quite difficult for the farmer to get large marketable bunches. His favorite banana varieties are kibuzi and mbwazirume.

Its average monthly harvest is between 150 and 250 bunches of bananas. He also sells mangoes to traders in Kampala who collect them directly from his farm every December. This explains why he has found it quite easy to keep his 11 children in school with the eldest now in his first year at Uganda Martyrs University Nkozi, studying commerce and accounting. His other achievement is a beautiful modern residential house in the town of Bijaaba. In the same small town, he also established a retail store. He also purchased land in Nansana, Kampala where he constructed a commercial building. “The monthly rental fees for this building are deposited into my account at Centenary Bank. My idea is to build more commercial buildings in Kamapala which will be a source of income for the family even when I am too old for active farming,” he says.

He says he looks back on the early days of his marriage and recognizes how important it is to hold back luxury in order to save money. “We gave up drinking tea with sugar and bread in these difficult times, but today we sell sugar and bread and other good things like cooking oil in our own store,” says he. “Now we have at our disposal all the good things that we sacrificed long ago to get to where we are today. This is the power of saving and sacrificing,” he says.

Ssemanda says he looks back on the early days of his marriage and recognizes how important it is to hold back luxury in order to save money. “We gave up drinking tea with sugar and bread in these difficult times, but today we sell sugar and bread and other good things like cooking oil in our own store,” says he.