Singaporean woman spills the (green) tea on being a farmer in Japan, Lifestyle News

Most Singaporeans might think of moving or working abroad to experience a new culture and lifestyle, but how many of us would actually have the courage to do it?

Ryhan Mohd Yazid, however, had no qualms about uprooting his life to Singapore to indulge his wanderlust. The 29-year-old quit her corporate job in 2019 to work at a green tea farm, D-matcha Kyoto, located in Kyoto Prefecture.

We were classmates at Singapore Polytechnic, and I remember her as a brave person who marched to the beat of her own drum. When we reconnected on social media recently, I was surprised to discover his new agricultural vocation. This lady is the true definition of #YOLO.

So why farm? Before she quit her job at D-matcha Kyoto last week to pursue a master’s degree at Kyoto University’s Graduate School of Agriculture, I had an overdue catch-up a few weeks ago with Ryhan, who has happily spilled the tea on life in Japan and what she misses the most in Singapore.

Agriculture is such an interesting and unexpected career choice. What do you like most about your job and what are the biggest challenges?

I think I’ve always loved farming – it’s something I’ve always wanted to do as a retirement plan! My previous job was as a research analyst in Singapore, working on the use of technology in agriculture in Asia-Pacific countries.

But then I thought, what’s the point of telling farmers how to use the technology when I don’t even know how to farm? So that’s when I quit my job and left for Japan – initially for a three-month stay.

I worked on different farms to gain additional experience. The biggest challenge, I think, is that I haven’t been trained for it at all – like, no knowledge of agriculture, other than home farming with plants.

Taking a job abroad takes a lot of courage. What made you decide to uproot your life in Singapore and seek this role?

When I did the three months of agriculture from July to October in 2019, I met my boss while I was still a volunteer. He then offered me the job. So, I uprooted my life in December. And then the pandemic arrived.

I stayed because I felt I still had a lot to learn in terms of farming life in Japan – and I really enjoyed the job. The unexpected part was that farming for a living can be a bit tedious. It’s like when you love something, but you have to live for it – it’s kind of like selling your soul, but you have to do what you have to do to make ends meet.

Tell us about your job and what you do on a daily basis.

I work as a Japanese green tea grower in Wazuka-cho, which is located in the south of Kyoto prefecture, bordering Nara prefecture. The company is called D-matcha Kyoto – we produce tea, and from there we produce other products such as confectionery and coffee.

We also organize tours, in person and online. Recently, we also made cosmetics. We try to venture into different aspects of how tea can be applied, to make it more interesting, especially for the youth market.

Tell us about your company’s Adopt-A-Tree project and how you’re getting involved.

This idea came from the pandemic. We used to have a lot of in-person visits; many customers from abroad came, and we could show them the tea trees and offer them tea tastings.

I was trying to find ways to keep our customers connected. We also had a sort of transition to organic farming to raise awareness that just because something is grown organically doesn’t mean it can’t be delicious.

We were also in the process of replanting new tea trees. So customers could actually watch the tea trees grow from the start and see them as living beings.

The tea trees will be adopted by name, so I hand make emas (small wooden plaques made for Japanese Shinto shrines) for all the adoptees, then every year we try to create a new product for them.

How is life in Japan? Was it difficult for you to acclimatize to the culture? What are some of the main observations you have made while working with Japanese colleagues? 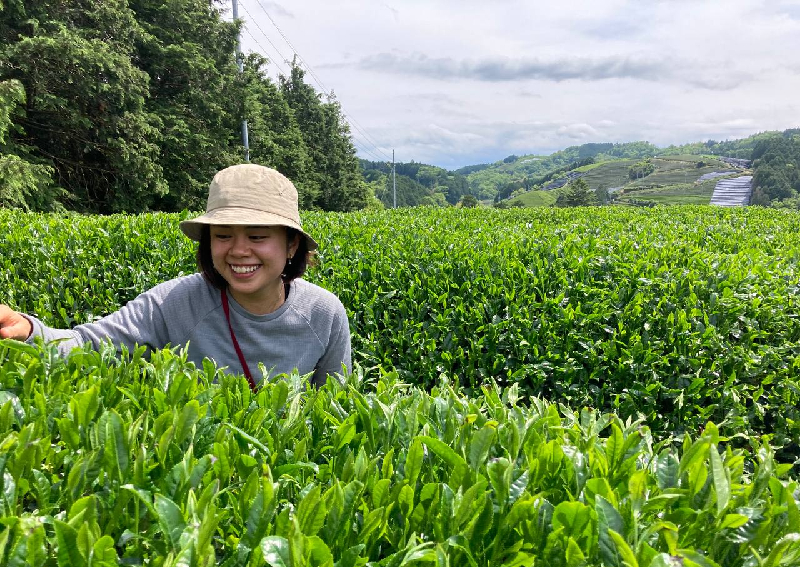 It wasn’t so bad because I’ve lived abroad before. I was living in Indonesia and working in coral conservation. During this stint, I was working in the rural countryside of Flores, near Bali.

I think in any Asian culture, I wouldn’t say there’s a hierarchy, but there are unspoken procedures that you have to follow to get what you want. Moreover, elderly people in Japan are very healthy. It’s crazy, man. You have 90-year-olds harvesting a ton of tea a day, and I’m like, wtf? What are you all eating, sia? They are damn strong, much stronger than me, I think. It’s crazy!

There is also the language. Especially in the countryside, they only speak Japanese. It was a big hurdle. I actually learned the language and spent about six months trying to study it when I was in Singapore, but it was more of an interest than part of my preparation to move. But speaking Japanese here and learning Japanese in Singapore are two different things.

What do you miss the most in Singapore and at home?

Oh wow, I really cried today at home because I realized how much I wanted to come home. It’s been almost three years. Bon lah, a year I can still tahan. Two years, okay. But three years is just a man too long.

Yes, I miss my family, friends, food and singlish. Wah, I missed so many things: My friends got married. My cat died. Two of my friends gave birth. You miss all of those milestones, but, at the same time, I’ve kind of reached the point where I’ve created a life for myself here. I think when I return to Singapore, I will miss life here too. I’m going to feel a little torn.

We also understand that you are pursuing your mastery. What are you studying and how does your work help you?

The inspiration behind my MA came when I wrote and translated a book about Japanese green tea. I also designed the book and used my own photos.

While I was doing this, I realized that, okay, I really wanted to go back to school and study more farming and farming. So I contacted one of my former interviewees and he recommended me to professors at Kyoto University. I applied and my current teachers happened to know my boss. That’s also another thing about Japan, it’s word of mouth.

My research thesis focuses on the social and technical limits of the use of technology in the production of handicraft heritage in Japan.

Any advice for Singaporeans considering a career overseas?

Do your paperwork. This is the most important thing, especially in Japan because it’s so tedious. There were times when it was so frustrating moving to Japan – everything was in Japanese and I didn’t understand what was going on. So many times I just wanted to explode sia. But just persevere through those little bumps and work through them – in the long run, it gets better.

Go out alone and make friends. That’s what I did. I was very lucky because the community kind of adopted me. (It’s probably not the same for everyone.) When I came here, everyone welcomed me. So now, when we travel together outside of Nara, they’ll just say, “Oh, we’re all from Nara.”

He’s reached that point of closeness, which I’m grateful for, but it takes a lot of effort. You won’t be friends with someone immediately. Just don’t have an ego!

For a more in-depth look at Ryhan’s works, click here.

ALSO READ: Here’s Why You Won’t See Chicken Rice On The Menu At This Singaporean Cafe In Tokyo

This article first appeared in Wonderwall.sg.