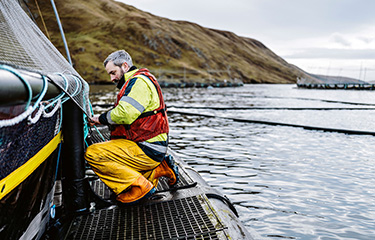 The awards were launched in 2006 to recognize measurable progress by organizations and individuals towards net zero.

In a category that included brewing and pub chain BrewDog; and waste, water and energy management service provider Veolia; Scottish Sea Farms won the award for its carbon-friendly initiatives. This includes increasing its use of renewable energies to rethinking waste to create circular economy products.

Accepting the award, Scottish Sea Farms sustainability and development manager Anne Anderson said it was helpful that salmon farming had the “great starting point” of having one of the lowest carbon footprints of any livestock sector.

“At the corporate level, we are taking these strong credentials even further, working in collaboration with like-minded supply partners and customers to set a new bar for sustainability in the industry,” said Anderson.

Among the producer’s initiatives, he has reduced single-use plastics by introducing returnable bulk bins, saving more than 2 million plastic boxes since 2017, reusing fish waste into by-products, including food for pets and fertilizers, and by adopting greener energies, in particular wind, solar, waves. , and hybrid in its farms and facilities to reduce its dependence on fossil fuels and reduce CO2 emissions.

Using locally sourced wood chips provides much of the facility’s heat and hot water, with the 600 kW system saving 683 metric tons (MT) of carbon per year compared to oil.

“Each success in terms of sustainable development fuels our ambition to do even more: from the implementation of a hydroelectric project to the Barcaldine Hatchery to further reduce fuel consumption, to connect remote marine farms to the mains where possible – and where not, to test the potential of wave and tidal generated energy. We are also considering reallocating fallow farms to support renewable energy projects,” Anderson said.