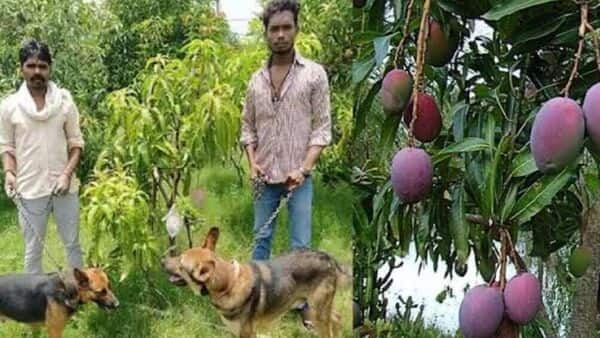 RPG Group President Harsh Goenka has shared photos of a breed of ruby-colored Japanese mangoes that are touted as the most expensive mangoes in the world. According to Goenka, a farmer from Madhya Pradesh grows a variety of Miyazaki mangoes on a farm in Jabalpur. This rare variety of mango is sold at ₹2.7 lakh per kg.

The unusual Japanese breed of ruby-colored mango, Miyazaki is considered the most expensive mango in the world, sold at ₹2.7 lakh per kg. Parihar, a farmer from Jabalpur, Madhya Pradesh, hired three security guards and 6 dogs to secure the two trees. pic.twitter.com/DxVWfjMT8F

According to a report by ANI news agency, Parihar, the farmer got the Miyazaki sapling from a man while traveling by train. The couple had no idea the tree would bear ruby-colored Japanese mangoes.

Mangoes take their name from the city in Japan where they are grown.

The city’s warm weather, long hours of sunshine and heavy rains have enabled farmers in Miyazaki to grow mangoes, according to the local report.

On average, the weight of a mango is about 350 grams. These mangoes are grown during the peak harvest season between April and August. Miyazaki mangoes are shipped all over Japan and their production volume is the second in Japan after Okinawa.

Miyazaki mangoes are rich in antioxidants, beta-carotene and folic acid.

* Thank you for subscribing to our newsletter.