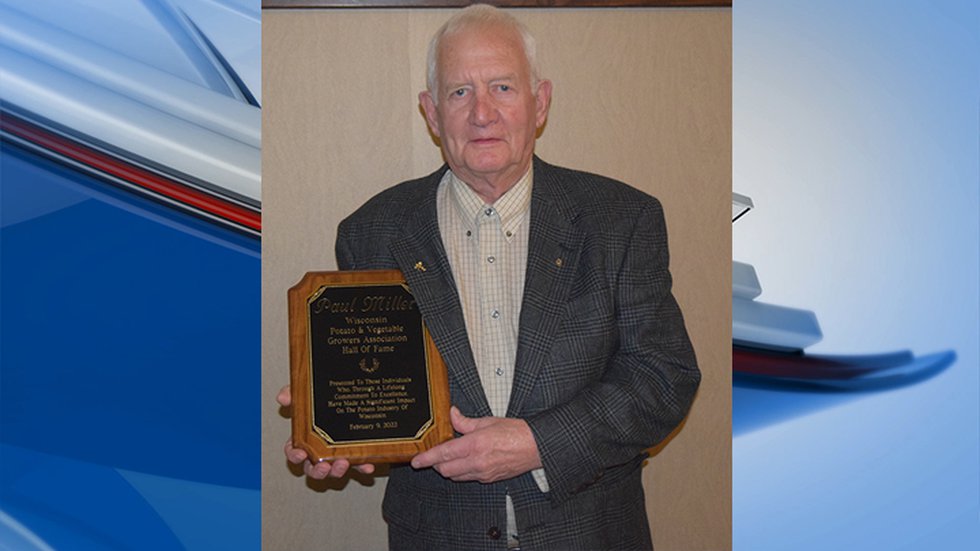 HANCOCK, Wis. (WSAW) – A Hancock farmer has been inducted into the Wisconsin Potato and Vegetable Growers Association Hall of Fame for his lifelong contributions to the industry.

Paul Miller is the President of Paul Miller Farms, Inc. He works with his family to grow 2,800 acres of vegetables, including potatoes, sweet corn, snap beans and peas, and cultivate 525 acres carrots for Bird’s Eye Foods and Del Monte.

He was officially honored at a banquet on February 9 at Stevens Point.

He said he grew up on his own family’s farm, started by his great-great-grandparents in the 1850s at Beaver Dam. There, he vividly remembers plowing a field when he was 8 years old. Miller graduated from the University of Wisconsin-Platteville, in 1965. He then worked for Green Giant, returning to Beaver Dam.

Two years later, he left Green Giant and became the farm manager of Badger Growers, a 1,000-acre green bean and sweet corn operation in Hancock. In addition to raising snap beans and sweet corn, Miller grew potatoes for American Potato (which later became Basic American Foods). In 1990, he and his two children purchased all of the assets of Badger Growers and formed Paul Miller Farms, Inc., a 1,100-acre irrigated potato and vegetable operation.

“There have been times when being a potato and vegetable farmer has been difficult,” admits Paul. “I had neighbors in the area when we started growing for American Potato, and nine of us came in together, forming a kind of cooperative. It was like the farming of old when they threshed the grain. At potato harvest time, five of us had trucks and there were two potato harvesters, and we went from farm to farm, from neighbor to neighbor, to harvest potatoes. That’s where it started.

The farm has continued to grow over the years. Today, including the leased land, the Millers farm 2,800 acres of potatoes and vegetables in Waushara County, all under irrigation. As well as transforming vegetable production, Gramma Miller’s Farm Market is an open seasoning, selling fresh seasonal produce, flowers, preserves, meat, honey, maple syrup and wines grown and produced locally. A three-acre field is dedicated to specialty crops for the farmer’s market, such as tomatoes, squash, peppers, cucumbers, pumpkins, Brussels sprouts, eggplant, melons, squash and Indian corn.