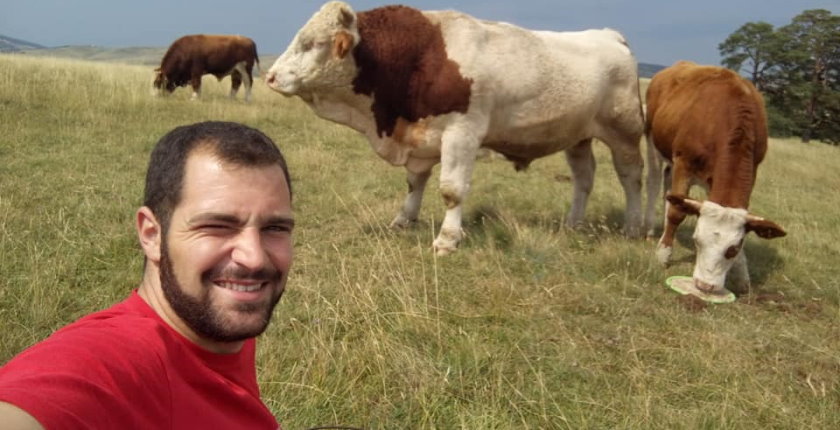 Dragan Simović, hero of the resistance against lithium exploration and mining in Serbia, is easily recognizable by the traditional Serbian hat (sajkaca) which he proudly wears to all protest rallies. His speech is slow and measured and yet his messages seem to resonate across the country. An activist and fighter, Dragan is first and foremost a hardworking and committed farmer, who runs his family’s farm household in his home village of Srednja Dobrinja in western Serbia. He is often compared to Miloš the Great, a legendary 19th century Serbian ruler who was born in the nearby village of Gornja Dobrinja.

We took a trip to Srednja Dobrinja to meet Dragan Simović – an activist fighting against the lithium mining projects of Rio Tinto and other companies, a young man whose wish is to spend his life in the village where he is born and where he is happy.

From the start of the protests almost a year ago, Dragan established himself as a leader of the revolt in his village. His natural attitude, a mixture of traditional and modern, his archaic language, almost forgotten in the media, and his sincerity, without any trace of self-interest, won him the popularity and affection of people all over Serbia, judging by social media.

His activism has inspired many. His wit and courage earned him comparisons to Miloš the Great, who led the Second Serbian Uprising and later succeeded in securing Serbia’s autonomy within the Ottoman Empire.

Dragan Simović says his working day is ’24 hours a day’

Standing in front of his house, Dragan greeted us with a beaming smile. He looks much younger in person than in photos or on screen, his thick black beard barely concealing his almost baby face.

He took us to a large room, which serves as both a living room and a kitchen. Dragan lives with his mother, his sister, who is currently doing her master’s degree in chemistry, and his grandmother. His father, Dušan, died in an accident about fifteen years ago, and he lost his grandfather the same year. The youngest in the family, Dragan completed primary school in Dobrinja and vocational high school in the nearby town of Požega. As a heating and air conditioning technician, he worked in a company in Požega for a month and a half, but he soon realized that such a life was not for him.

He returned to Dobrinja, where he now cultivates 15 hectares of land, seven of which he rents. The fields provide most of the food Dragan needs for about 20 beef cows, nine dairy cows, four heifers and five bulls. He says his working day is “24 hours a day”.

How Dobrinja villagers woke up

When they first learned of the plan to build a mine with a large pit and an even larger tailings pond, and when they heard of plans to expropriate and sell land and relocate , most of the villagers didn’t pay much attention to it. With so much on their plate every day, from toiling in the fields to worrying about crop yields and prices, hardly anyone had time to think about “lithium, or something like that.”

“When I was invited to a gathering at the community hall, I was in disbelief. I thought someone was joking. For us peasants, the land is a treasure. I know its value and what it brings… However, when people came from Loznica, people who had been in the same situation for a long time, I realized how serious it was. I had heard, in passing, of Jadar and the mine, but it had seemed so distant and unreal. Unfortunately, we live in a country where this cannot be seen or heard on national television. I admit that I was not too interested in the subject at the time. After the meeting, we all left the community hall shaken, scared and worried. We realized that the very next day someone could show up and start drilling, destroying water sources, ruining meadows, fields or forests, taking our land and relocating us. Relocate where? We are all attached, emotionally, mentally and in every other way, to this earth. What would I do with the cemetery? My father is buried there, my great-great-great-grandfather, my great-grandfather, my grandfather…. Could a normal person just give up, leave it all behind? Can I take it all with me to a supposedly nicer and better place to live? says Simovic.

“Someone could just show up and start drilling, destroying the water source, ruining these meadows, fields and forests”

After the initial protests, residents of Srednja Dobrinja, as well as the neighboring villages of Gornja Dobrinja and Donja Dobrinja, came under pressure, while their activities were ignored by local media in Požega. When discussing the mine, they refer to its opponents as a “politically manipulated minority”.

Simović is irritated by this. He says that a large majority of people in the three villages know the consequences of lithium mining and will never allow it on their ancestral lands.

All residents of Dobrinja who have their own agricultural households, he says, are against the mine. Those who say they are in favor are people whose children are employed by the state and have been threatened with losing their jobs if they revolt, but they are very few, according to him.

The villages have two cold stores large enough for fruit processing, three mini-dairies, carpentry workshops, two elementary schools for the first four years and one for grades up to eighth, and a preschool class, while a kindergarten will soon be opened, according to Simović.

“We are currently collecting signatures for an initiative to ban the mine. Unfortunately, the local media do not dare to mention the initiative. There was no report on the local television channel, not one,” he said.

“People recognized themselves in my words”

Through his authenticity, honesty and common sense reasoning, Dragan has become the icon of a movement that not only opposes the opening of lithium mines, but also seeks to end the devastation of nature in Serbia. Here’s how he explains it:

“People have recognized something in themselves, something they may have forgotten as life pushed them. Maybe it’s that authenticity that is mine. When you recognize something in the way someone is talking about, you wake up and wonder why things are the way they are. And thank God, people all over Serbia are waking up,” he says.

Although very young, Dragan is deeply rooted in Serbian tradition. He believes that the problems in our society arose when we abandoned our age-old customs, culture and traditional upbringing. For him, the countryside is an oasis, the only place where the heritage of his people is preserved.

“We survived because our faith in God, in our land, in our fathers and grandfathers was strong… All this has been constantly poisoned for thirty years, if not much more. Today, everyone has rights and no one has obligations. They ruined our education system, they ruined family values. Healthy relationships only survive the campaign. These people who are for the mine have forgotten God, just as they have forgotten that their grandfathers and great-grandfathers died for this land. They have forgotten the value of land – all they care about is money. Fortunately, there are very few of these people in our village,” says Simović.

The common misconception that peasants are ignorant no longer holds water. A large majority of Dobrinja residents know very well what “benefits” they would reap if lithium mining were to begin. Although limited to personal contacts, rallies and social media, activists are successfully delivering their message.

Dragan Simović raises 20 cows on his estate in Srednja Dobrinja

His views on contemporary society are even darker. People, he says, are alienated and disconnected from each other, and there is no sense of community. The race for survival and material gain has erased people’s humanity, says Simović. Today, you have to work all day to survive. People don’t visit each other. No one bothers to sing a song anymore, as people used to do in the villages while harvesting or doing other work in the fields. “When you deprive a man of his faith and his culture, you kind of imprison him,” he says.

Simović, however, is more optimistic when talking about the resistance against the mine and the people of his village. He is proud of the fact that at least ten villagers came to ask his family if they needed help with field work as he camped and demonstrated outside the Serbian Presidency in Belgrade, demanding, among other things, a permanent ban on lithium mining in Serbia as well as in Dobrinja.

“It’s easy to be brave and fight when you have people like them around you. That’s why there will never be a lithium mine in my village. As for me, I know I will fight until the end,” he said.

He continues, with great pride: “I cannot dishonor my great-great-grandfather, who crossed Albanian Golgotha ​​during the First World War and obtained a medal, or my great-grandfather, who fought for six years in World War II, or my grandfather, or my father, who fought in that last war and received a medal for his bravery. They fought in wars, and they fought and starved to buy this land, one little piece at a time. I swore to my late grandfather never to sell the land except, God forbid, in case of illness or to pay for my children’s studies. I will never break this vow.