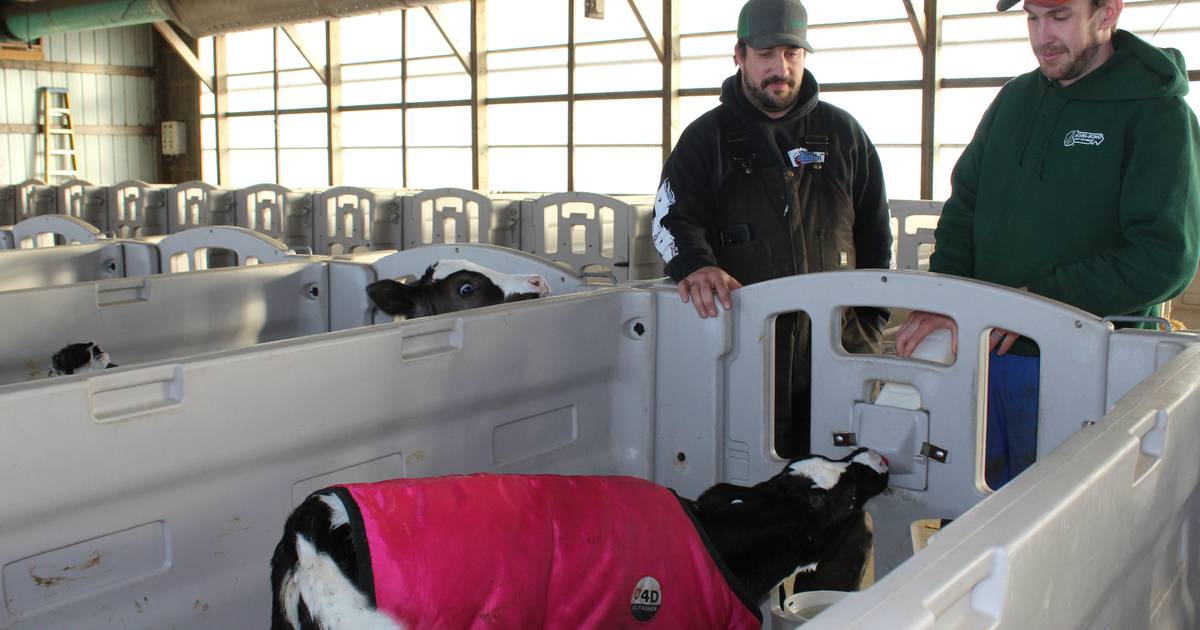 Follow the Mitchell family throughout the year. Each month, look for updates on family members and the decisions they make on their farm.

WINNEBAGO, Ill. — Several generations of Mitchell farmers have managed crops and livestock on land near Winnebago.

“Our family has been here since the mid-1800s, and we are the sixth generation to farm and the seventh generation to own the land,” said John Mitchell, who along with his brother, Aaron Mitchell, are partners in Mitchell Dairy and Grain. LLC.

“We have two great-great-great-grandfathers who were Civil War veterans. One of them was the first land buyer in Winnebago Township, and he bought the land from the Galena Land Office,” Aaron said.

“Our grandparents bought this farm in 1960,” John said.

It was then that the family moved from a diversified operation to dairy farmers with 18 poles in the original barn. Shortly thereafter, a four-rafter double milking parlor was built.

“It was the first milking parlor in the county,” Aaron said.

For many years, the dairymen milked around 100 cows. The family built a new milking parlor in 2004, beginning the growth of the operation.

“It was a double eight herringbone lounge, and it was built for expansion, so now it’s a double 12,” John said.

Just two months after John returned to the farm after graduating from the University of Illinois, his father, Mike, and brother, Kyle, died in a manure and gas accident.

“Aaron and I both have animal science degrees from the U of I,” John said.

Expansion of the farm continued in 2009 with a new calf barn, cargo shed and bunker silos.

“In 2014 we started building our new free stall barn and we were processing about 180 cows as we prepared to expand,” John said.

“That year we formed the LLC,” John said of the company, which included John, Aaron and their father’s cousin, Tim Mitchell. “We grew corn, soybeans, alfalfa, wheat, and a cover crop of rye that we harvested for silage.”

The cows moved into the free-stall barn in May of the following year, and farmers have since milked 350 to 420 cows.

“We’re dealing with about 400 right now,” John said of the registered Holstein herd.

“In the ’80s, Dad took the herd from all levels to recording,” Aaron said. “And he also brought registered cows.”

“At this point, most of the cows we’re calving now were born here,” John said.

The operation also includes approximately 230 acres of alfalfa, which is harvested entirely as silage.

“We determined a few years ago that in our part of the country making dry hay is unreliable,” Aaron said. “For the past three to four years, hay prices have been high, so we rarely have dry hay in the dairy ration. However, we bale some waterways for heifer feed.

“In March 2020, Tim separated on his own with his son, Steven, and they’re reframing,” John said. “We rely heavily on Tim and Steven for the agronomy of raising and harvesting our forages.”

Each of the brothers focuses on different areas of dairy farming. John does most of the animal feeding, works with the nutritionist on dairy rations, does the fresh cow health work, handles maintenance and repairs, and finishes the books.

Aaron works with young stock, manages the milking parlour, handles payroll, works with the vet, and completes the AI ​​herding of the herd.

“John and I work with our Semex rep to do sire selection,” Aaron said. “He uses SemexWorks and we have different bull options to use. We raise approximately 50% of our dairy herd with beef bulls and the rest with sexed semen.

“One of our full-time scraping and maintenance guys has been here for almost 30 years,” John said. “And we have five people who have been with us for over three years, so we found some good people and we were able to keep them.”

The Mitchells sell their milk to Prairie Farms, which has a plant in Rockford, just seven miles from the farm. The current rolling average for the herd is 28,139 pounds of milk, 1,147 of fat and 878 of protein.

“We have been one of the winners of the Holstein association’s progressive genetics herd for the past 23 years,” John said. “That means we rank in the top 500 herds for the Total Performance Index, which is the official ranking for Holsteins. Last year we were the #3 herd in Illinois.

Breeders use TPI as a breeding goal.

“We developed a client index at Semex based on the TPI formula,” Aaron said. “We are adjusting it to be heavier on milk components since we are in a production limit to sell our milk.”

“Our milk check is based on pounds of fat, protein and other solids,” John said. “Since we are limited to milk production, not components, we focus on components.”

“I’ve been an Illinois Junior Holstein advisor and dairy bowl trainer for 10 years,” John said. “And I served on the Holstein board for seven years.”

“I served two terms on the National Junior Holstein Advisory Committee as a junior member and senior advisor,” Aaron said. “And I’ve been on the Holstein board for six years.”

“This is my fourth year on the committee and my second year as chair of the government affairs and commodities subcommittee,” said Aaron, who is married to Ashley.

John is Vice Chairman of the Winnebago-Boone Farm Bureau and Chairman of the Legislative Committee. John and his wife, Katie, are the parents of an 11-month-old daughter, Cora.