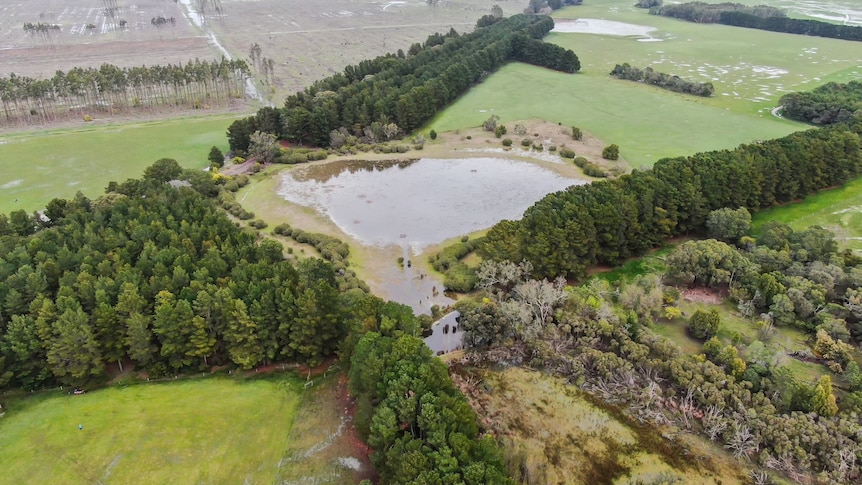 Farmer John Fenton’s obsession with planting trees was ridiculed, but he created a legacy

In the dead of winter, when wind, rain and biting cold make Victoria’s western districts a grim place for farmers and livestock, David Fenton feels like Australia’s luckiest farmer.

“I may be living on the best farm in the world. It’s a great place to wake up in the morning and a great place in the evening,” he said.

“Every day there is something new.”

One-third of Lanark is covered in constructed wetlands and several hundred thousand planted trees to provide shelter for livestock, wildlife habitat and forestry.

“Those are probably my two favorite words, and we have been for at least 12 to 14 years.”

His late father, John, created the wetlands and spent decades planting trees and transforming the windswept, nearly treeless farm he inherited in 1956 into an environmental gem.

In 1997, when Landline first visited Lanark, John Fenton had spent over half a million dollars on trees.

He admitted that his obsession meant agricultural productivity had suffered.

John’s environmental vision was celebrated, but it caused tension at home.

“I had to lay down the rules over and over and say, ‘I’m sorry, but you don’t get any income from your trees, other than beneficial shelter for the animals, and if you don’t have your pastures, there’s no There’s no point doing it,” said his wife Cicely Fenton.

David said his father knew the farm needed to be more productive, but “he just wouldn’t admit it”.

When David inherited Lanark in 2003, he improved the pastures and replaced the aging fences, yards and mowing shed.

As many rural families know, intergenerational succession can be difficult, and that was the case in Lanark, with John hovering and criticizing his son.

But it finally passed.

“Shortly before he died, he put his hand on my shoulder and said, ‘You keep doing what you do. You’re doing a great job,’ which meant a lot,” David said.

They might have argued that trees were the priority, but John taught David a valuable lesson: trees were not the enemy of pastures, the shelter they provided from the wind and sun. more than made up for the space they took up.

“Twenty-three to twenty-five percent of the trees on your property don’t affect the amount of livestock you can farm,” David said.

Ready for the next generation

Despite a cold, wet and windy winter, lamb percentages were over 150% and survivability was high due to the many sheltered areas on the farm.

David did not need to sell the forest land planted by his father to secure a perpetual and alternative income.

His son, Will, runs a crutch and sheep scanning business, which sees him working on many farms.

“I love Lanark. It’s so special, and now that I’m older and can compare it to other places, there’s nothing like it,” Will said.

He hoped to be the next keeper of the farm.

“I plan on it being here for my kids, their kids’ kids and my two sisters,” Will said.

John and David’s work meant that there was no heavy lifting for the next generation.

“It’s pretty well planted now,” Will laughed. “Coco made sure of that.”

The only additional planting would be the harvesting and replanting of some of the agroforestry blocks.

Will and his sister, Georgia Fenton, were too young to have seen Landline’s 1997 and 2006 stories about the grandfather they called “Coco”.

Georgia said she was “blown away” after hearing the old stories.

“I never really saw much to do with the farm back then,” she said.

Will said the place looked like it was “falling apart” in Landline’s first story.

“If it hadn’t been fixed, I don’t know if the farm would have survived,” he said.

“The fact that he was able to have that image in his head and totally go against the grain at the time, it’s unbelievable.

“Who has that kind of foresight?”

John Fenton’s ashes were at his two favorite places, Lake Cicely, the wetland named after his wife, and in the oak grove he planted so that his great-great-great-grandchildren could also collect them.

David and his children are reluctant to chop down the oaks and hope that the future Fentons will leave them standing.

“I much prefer to hear grandkids and great-grandkids running under them rather than hitting the ground,” David said.

“The grandchildren will learn the story of what Coco made, and I’m sure they’ll enjoy it as much as we did.”

2022-09-06
Previous Post: When time is the farmer’s enemy
Next Post: The “Ride With A Farmer” program returns this fall