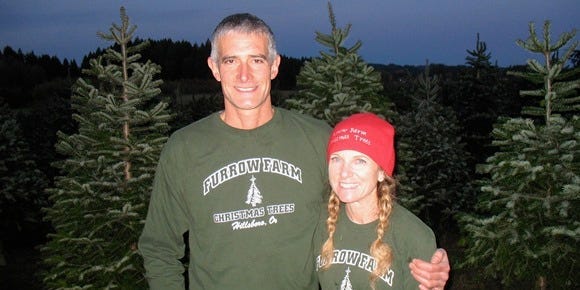 Dana Furrow and her husband, Matt Furrow, are the owners of Furrow Farm in Hillsboro, Oregon. After growing and selling Christmas trees for decades, they have suffered an unprecedented loss of seedlings this season due to the drought and heatwave this year.

That’s her story, told to freelance writer Colleen Hagerty. It has been edited for length and clarity.

My husband is a third generation hazelnut grower in Oregon. As a teenager, he went to work for a Christmas tree grower and began planting his own small amount of trees once he learned the ropes.

He was 17 at the time, and together he and I have been doing this for about 30 years.

There are a lot of things you can do to grow a Christmas tree: prepare the ground, fertilize, rake, cultivate, and go with your team to plant the seedlings. Then we have to make sure that they are well in the ground and that they stand up straight – if we don’t, that’s when you get the curved trunk.

We still have people who think that a tree is planted one year and then the next year it is ready to be harvested. I don’t know where they got this idea from, but it takes a lot longer – six to 10 years for crop size – so you’re spending a lot of time and money before you sell your product.

In addition, the trees require care all year round. It’s not just about harvesting them or planting them and letting them grow; you have the fertilization and pruning, plus the planting time alone.

Our tree area to be cut (U-cut) is 120 acres, which includes two hazel orchards and some pastures, and we also offer fresh cut trees if people don’t want to cut down a tree. We probably plant 30,000 to 40,000 trees a year.

You lose a certain percentage – I remember my husband saying that you expected to lose about 20%. You always have that plus regardless of your other risks, like the weather.

In June, it reached 115 degrees

Spring has been really good for the trees this year, and we actually had more trees to cut than we thought. But then June arrived.

The drought and intense heat that month virtually killed all of our seedlings in the valley. We also had a very promising amount of noble trees to cut this year, but the whole peloton were hit hard by the heat.

When you see mature noble fir trees starting to blush, you say to yourself “Oh, no”.

If you’ve seen diseased trees before, the heat damage looks like this – or like having your tree in your house for a few months and putting it outside until June or July. The needles fall apart.

Even if it’s just a branch or a quarter of a branch, when people go to cut down a tree and they see it, they are not going to cut that tree down, because they are afraid of it. ‘it dries up even faster. Also, it doesn’t look good. Christmas trees should look green, not already dying.

I felt helpless. We’ve invested time and money in these trees for eight years, 10 years – and every year you pay for labor and other growing costs, and then that tree is not salable.

Hundreds and hundreds and hundreds of trees are like this, and you want to have enough trees to get you through your season and make sure everyone has a Christmas tree. You hate to let your customers down, and if you have to shut down your farm sooner, it’s like, “Where are people going now?” Because a lot of farms around here have suffered a lot of damage.

We’ve never had to face this before

We believe some of the heat damaged trees will return, but it could take a few years. We’ve never had to deal with this before so we don’t know, but hopefully they can maybe turn green later or grow bigger and then we can cut off the damaged parts.

We are also going to replant some fields that we lost this year. The maybe 50 plants that did it – which is nothing compared to how many we planted – we got out of the ground, and we’re going to rework the soil.

Usually we start planting in late winter or early spring, but we’re actually going to try planting this fall because we get more rain this time of year. We have planted more Nordman firs and Turkish firs, which are more drought tolerant, but they don’t like rain too much either. It’s basically one extreme or the other.

We have already seen a shortage

In our area there were a lot of farms that just gave up when the economy fell in 2008. So we already saw a shortage and we have a lot more people than we used to live here. . We were still open until December 24 of each year, but over the past couple of years we ended up shutting down our logging section in the middle of the season.

But we are not all sad. We have a lot of fresh cut nobles that we can cut down. We had rain, which is good.

Everything is turning green. There are still trees to be cut; people just might not be able to cut that much. I’ll probably put up a sign explaining the heat damage, in case people haven’t seen it on the news.

We open when we always do: the day after Thanksgiving. I hate telling people to get trees ASAP because I don’t want to start a frenzy, and I’m sure there will still be plenty of trees available. You may need to get a smaller tree than usual, or maybe a different variety.