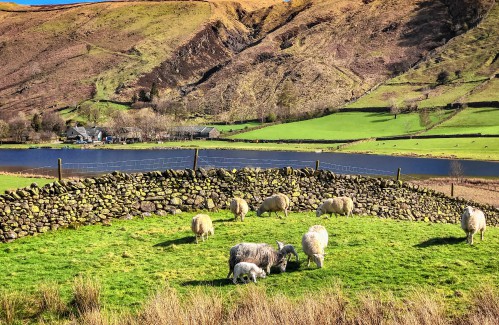 The shift from hunting and gathering to cultivation was undoubtedly one of the great turning points in human history. It was probably the first human endeavor that involved changing the environment to suit our needs, and probably led to the growth of cities and city-states.

The failure of certain food systems has been cited for the decline and fall of some great civilizations. Today, we face a different kind of challenge to our food systems: the globalization of our food supply (and its breakdowns) and the effects of large-scale industrial agriculture across the globe.

“Pastoral Song: A Farmer’s Journey”, by James Rebanks, is a personal story of the changes that have taken place on an English hill farm over the last half century. It is a microcosm of what has happened in agriculture since the end of World War II.

Born in 1974, the author arrives a little late in the story, but he is no less convincing for that. Its opening pages hark back to the past as it describes sitting in the back of his grandfather’s tractor as a child:

“I was a boy living in the last days of an old agricultural world. I didn’t know what was coming or why, and sometimes it would take years to reach our fields, but I felt that day was worth worth remembering. This book tells the story of this old world and what it has become. It is the story of a world revolution as it unfolded in the fields of the two farms It’s the story, the warts and everything, of what farming was like here when I was a kid, and what it’s become.

The book is in three parts, focusing on three generations: “Nostalgia”, “Progress” and “Utopia”. For me, all this has a tinge of irony. None of these moments are ideal, none are hopelessly bad, but there is hope in the end.

The protagonist of “Nostalgia” is a grandfather, married to the old ways, mostly – he ditched horse-drawn machines in favor of an almost antique tractor – and took James under his wing to teach him as much as he could about these ways. Without knowing the name, he operates a “mixed” or “rotational” farm, where the planting of fodder fields and the sheep and cattle farming work together to feed the family and maintain a good balance.

Grandpa is as committed to the birds in his fields as he is to his livestock and crops. He intuitively knows that the land is healthy (he might not call it that) if the birds are well.

At one point, while driving through a field, he stops the tractor and retrieves a clutch of curlew eggs from a nest on the ground. He then resumes his work and puts the eggs back in the nest when he is finished. “When we walked around the field ten minutes later, the mother curlew was nestled in the dusty seedbed as if nothing had happened, and my grandfather smiled.”

On another occasion, Grandpa decided to teach James the names of all the grasses in one of the farm’s meadows: meadow fescue, timothy, ryegrass and others. He tells James “every kind of plant said something to a good farmer”.

Some tell him that the soil is fertile; others report that it needs its nutrients restored. This man understands what the earth is telling him.

In “Progess”, James’ father takes center stage. He farms rented fields not far from Grandpa, but often disparages the old man for being stuck in the 1950s – not harvesting his crops when everyone else does, worrying about those curlew eggs, tending hedgerows of thorns rich in plants, insects and birds.

Dad struggles to keep up and goes deep into debt as he tries to acquire new machinery and new breeds of cattle while working harder than ever. At the same time, supermarkets are driving down the prices of meat, milk and other staples, crowding out small farms. Other farms are expanding, hedgerows are gone, and fields are being managed with expensive chemicals and equipment in the name of efficiency.

James realizes that things have gone too far, that new technologies “have been used in such a way as to [make] it is impossible for wild things to live or reproduce. It’s not wanted, he admits, but it’s the effect.

After the death of his father, James is now the main character of “Utopia”. His family lives on grandfather’s farm and he is drawn to restoring the earth’s ecological balance – not to “re-wild” it, but to bring back the plants and animals his grandfather considered. as cohabitants of the place.

He learns that the creek that crosses the property has straightened over time, causing flooding downstream and stripping the fields of their topsoil. He is relearning to alternate grazing to avoid overgrazing and encourage the “good” grasses that his grandfather taught him to memorize. He doesn’t use the word “agroecosystem”, but that’s what he’s creating.

“Pastoral Song” is a book to savor. Although James’ story is mostly farm-scale, it still has lessons to teach us about where we’ve been and where we’ve gotten lost. And while the present is no utopia, this book shows what’s possible, for the farm, for the birds — and for the planet.

Michael Dover is a retired environmental scientist and former board member of the Hitchcock Center for the Environment. “Pastoral Song” was released in 2021 by Custom House, an imprint of HarperCollins, and is available in many libraries across the CW/MARS System.

2022-08-05
Previous Post: The PEI Harvest Home Festival. is coming back this fall
Next Post: Singaporean woman spills the (green) tea on being a farmer in Japan, Lifestyle News