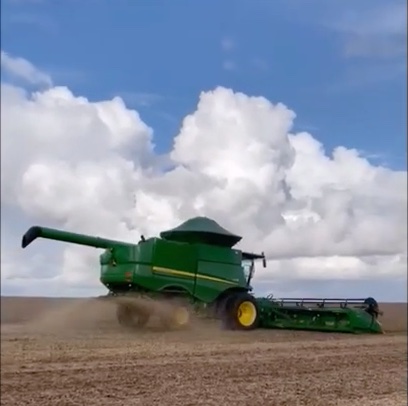 A fleet of machines takes to the field during the peak season at Charles Peeters’ farm in Brazil.

Peeters farms approximately 8,649 acres in the state of Goiás, located in central Brazil. His parents started the family farm in 1985, and Peeters’ father became a pioneer in the adoption of no-till. It also paved the way for growing corn as a second crop, which Peeters does in this video shared by Global Farmer Network.

The process begins with the combine harvester in the field harvesting the soybeans. Peeters then spreads brachiaria grass seeds and no-till corn in the grass seeds. The result is 3 machines working in the field at the same time and a successful second corn harvest.

Peeters says he’s always looking for ways to adopt more sustainable practices. His farm is part of a group that conducts its own research into better technologies and crop management systems for the sustainability and efficiency of the agricultural enterprise.

In addition to no tillage for 31 years, the soil in Peeters is permanently covered with cover crops. The farm produces around 15 tons of cereals per hectare per year and keeps at least 10 tons of dry matter on the ground, thus protecting the biological activity and biodiversity of the soil and mitigating water erosion.

Record soybean crop forecast for Brazil: Brazil, the world leader in soybean production, is on track to produce 5,172 million bushels of soybeans in 2021-22.

10 tips for successful no-till in South America: The adoption of no-till and conservation agriculture practices has exploded in South America since its introduction in the 1970s.

the No-Till Passport Series is brought to you by Martin Industries.

More from this series

Since 1991, Martin Industries has designed, manufactured and sold advanced agricultural equipment in the United States and Canada. Known for Martin-Till planter accessories, the company has grown to include a five stage planting system, closing wheel systems, twist pull chains, fertilizer openers and more in their line. Their durable and reliable planter accessories allow more and more farmers to plant in higher residue levels.