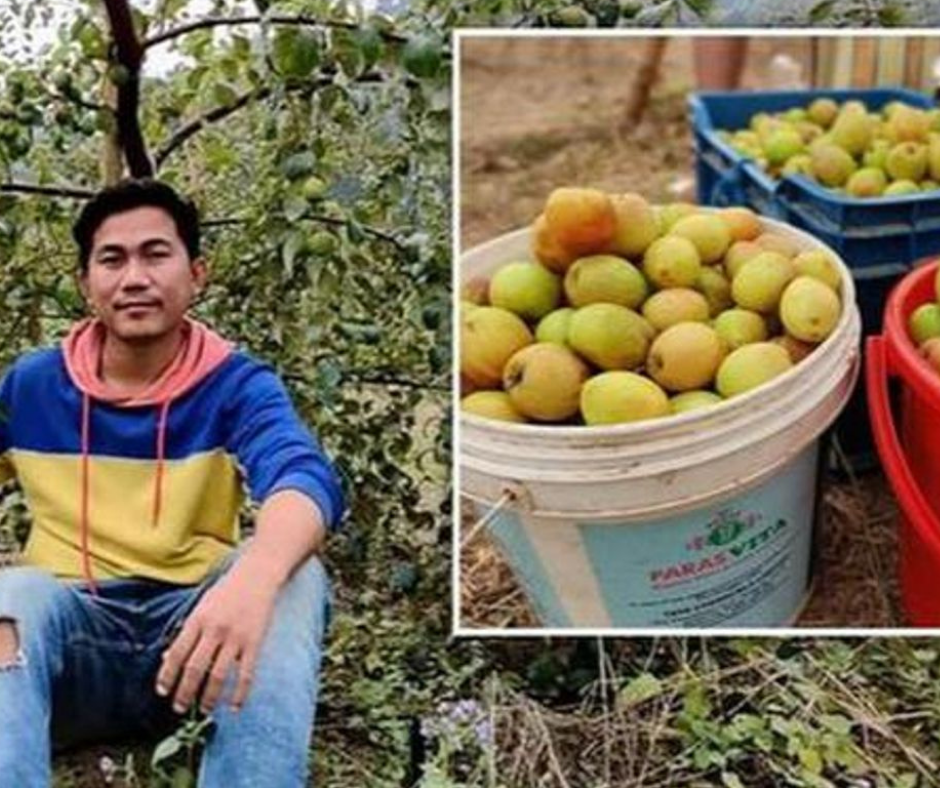 What links Kashmir, Bangladesh, and Tripura together? It’s the Apple from Kashmir Ber, before you start to think of any conspiracy ideas. And Bikramjit Chakma, a native of Tripura from PÃ©charthal, Unakoti, gave the example of self-sufficiency by cultivating the fruit in his state, being the first individual in the state to do so.

And he more than doubled his money in a year. How? ‘Or’ What? Continue reading.

Bikramjit works as a field agent with Tripura OBC Company during the day. But he also enjoys working with members of his family. Bikramjit saw his uncle and his two cousins â€‹â€‹grow up potatoes, radishes, and other seasonal crops. However, they only did Rs. 1000 per month of profit. The family had a lot of land, but the existing agriculture could not even meet the basic needs of a family, let alone help them live happily. This encouraged Bikramjit to start a new business, even if it meant taking a risk.

Of course, Bikramjit didn’t have much success at first. He and his relatives tried many crops including areca nut, drumsticks, etc., but after failing to make a profit, Bikramjit decided to try something new.

“I was Google searching for crops that might be useful for cultivation when I came across a YouTube video from “Shykh Seraj”, a well-known journalist from Bangladesh. He was discussing the benefits of planting Kashmiri Apple Ber in Bangladesh, â€Bikramjit said.

Bikramjit wondered: if people can grow up Kashmir apple Ber in Bangladesh, why not in Tripura, which has similar weather conditions and a long border with Bangladesh?

He planted around 1,300 seedlings in a month from March of last year and the plants started flowering in late October. They were ready to be harvested in January.

“My uncle, Chanchal Kumar Chakma, and two cousins, Ranjit Chakma and Biswajit Chakma, all contributed significantly to the achievement. Today, we have benefited from their persistent efforts, â€adds Bikramjit.

All crops have been harvested and available for sale between January and March. They collected around 40 quintals of Kashmir apple crab, he said. They sold 12 quintals of fruit to wholesalers and the rest to the local market.

“We had no idea that the seedling I brought would grow in the Kashmir apple tree. However, with proper care, one can reap the benefits year after year,” Bikramjit said, adding that he would get the double fruit next year.

â€œA lot of people have never seen something like this in Tripura before. As a result, initially it could sell for around Rs.200 per kg.

One day later we sold 12 quintals of fruit to wholesalers for 56 rupees per kg. The rest of the fruit is sold in the local market for an average of 115 to 120 rupees, â€he said.

This year the family made around Rs.6 lakh, and they expect to double the amount next year. â€œOne tree produced a maximum of 25 kg and a minimum of 8 kg of fruit this year. We should be able to get 70 to 80 quintals of fruit next year. â€œThe harvest will start in January,â€ Bikramjit said.

“This young man has been successful in implementing a new agricultural concept with his uncles. In the 6 Kani region, he cultivates Kashmir apple trees. For the first time, he harvested around 40 quintals of fruit. By investing Rs.2.5 lakh, this young man earned almost 6 lakh rupees.

Bikramjit is convinced that the trees will produce twice as much fruit next year. I salute his initiative. â€œHer drive to become self-reliant and be successful will encourage others in the state,â€ Deb wrote on Twitter.