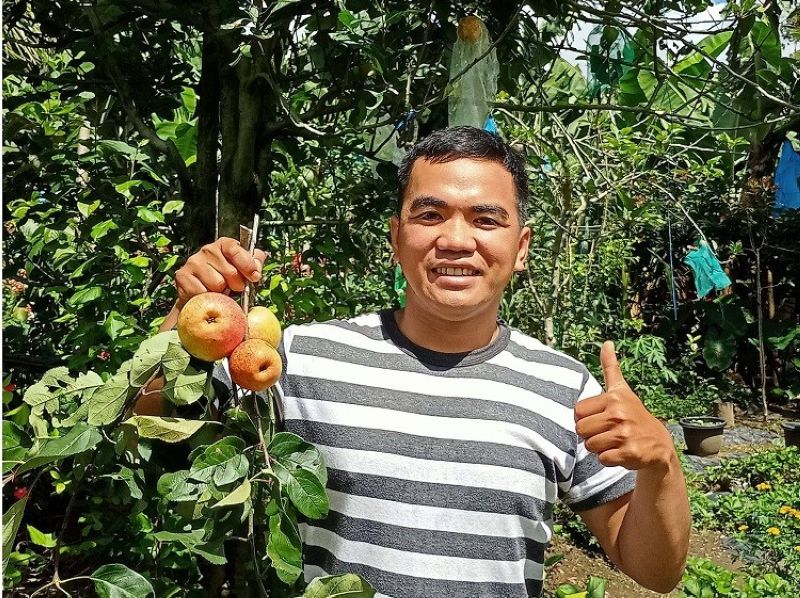 LIFE is like a seed. It takes a long time for the fruits of your labor to become apparent and healthy enough to be picked.

For Benzone Kennedy Sepe, a 30-year-old farmer, he made an impossible seed germinate in his own way.

Growing apples in a tropical country like the Philippines may seem impossible at first, according to the Department of Agriculture, as they grow best in cool climates. But with his agricultural breakthrough, Sepe made it possible to grow apples in Kapatagan country, Digos City in Davao del Sur.

Sepe revisited his interest in growing apples while eating apples at the mall seven years ago.

Out of curiosity, Sepe tried growing a simple apple seed in a small part of his lot in 2014. He extracted three seeds from an apple he was eating, then planted them in seashells and transferred them to bags of seedlings when they have reached about five inches. All the seeds germinated, but only one tree survived.

From a small space in his garden, he now grows this fruit in a 600 square meter yard where 30 apple trees are planted. He planted 40 trees in front of their church while on half a hectare of land that he rents, he grew 300 apple trees.

Most apples grow in temperate areas with seven to 12 degrees Celsius (Â° C), but in Kapatagan, which is located in a mountainous area at the foot of Mount Apo, the region’s cool climate is suitable for fruit production. exotic.

Some varieties of apples are now very adaptable to the climate, even in tropical countries like Kenya in Africa.

Based on his successful experience, he sees Kapatagan as one of the main apple producers in the market.

During his trip to South Korea in 2014, he came across a local magazine showing local farmers growing mangoes in greenhouses.

The challenges of apple cultivation

As they say, if you’ve never tasted a bad apple, you wouldn’t appreciate a good apple. This is how Sepe described his appreciation of apple cultivation.

Aside from limited space, planting these seeds does not guarantee that they will all thrive.

Apple trees are also vulnerable to fungal infections, which causes some to rot easily.

The weather is also another major challenge.

He said the strong winds and previous rains also affected his apple crop, with some trees affected by a landslide.

This had motivated him to start a â€œfood forestâ€ project, which not only meets the need for food, but also contributes to the protection of the environment.

With this, he spent more time learning how to grow apples through books, newspapers and on the Internet.

Pest control is also a must, as these are also nuisances on his farm.

In 2018, Sepe started harvesting the first fruits of his apple tree. He harvests 30 to 35 fruits from the same tree at each harvest.

In temperate countries, apple trees take five to seven months to bear fruit. In his experience, it only takes four months to start harvesting apples in his area.

But due to its poor germination, it is necessary to plant as many seeds as possible.

In terms of taste, its apples do not fall short of the high quality standards compared to commercial apples.

Besides apples, Sepe also grows other crops in his orchard, including pear, persimmon, peach, orange, durian, grape, strawberry, guava, vegetables, among others.

Kapatagan Apple Orchard also became an agrotourism designation by people who wanted to see tree apples as it is rare in the country.

Visitors and learners interested in apple cultivation can visit the site with an entrance fee of P 20 per visitor.

In addition to being an arborist, Sepe is currently a fourth-year Bachelor of Science in Agriculture student with a major in Horticulture.

In his spare time he has also been a vlogger since 2018. His youtube channel Benzone Kennedy F. Sepe currently has over 20,000 followers, and over 1.3 million views.

When the pandemic hit in March 2020, he became more active in vlogging to extend his reach to viewers who cannot visit his farm when the country implemented enhanced community quarantine.

According to YouTube video analytics, the majority of its viewers are minors. With this, Sepe was happy that more young people are now interested in farming and farming due to the huge influence of social media.

For his fellow youth who are considering choosing farming as a career, he said that as a farmer they should explore more areas because there is a huge world of opportunities.

He also hoped that farmers like him would also be morally energized by his success story.