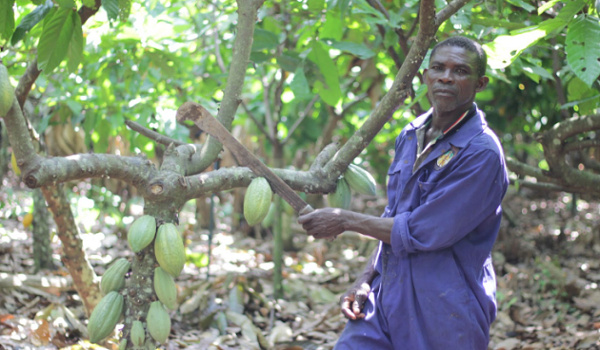 The executive director of Odonkor Farms has asked the government to help him expand his cocoa farm from 45 acres to 1000 acres.

The Odonkor Farms is a family farm located in Tadieso in the Northern District of Fanteakwa in the Eastern Region of Ghana. The farm consists of several farms producing like cocoa, plantain, taro and cabbage. Visionary farmer, Mr. Odonkor Isaac Langmatey has recently added coconut and palm nuts to his range of agricultural products. Although he engages in other crops, the farmer mainly focuses on cocoa. It has up to 45 acres of cocoa plantation. The farmer, however, intends to expand his cocoa plantation to around 1000 acres of land.

“I really want to expand my cocoa plantation to 1000 acres but I lack the funds to support my big vision,” the farmer said.

He mentioned, “I will need government support to buy more land so that I can expand my farm as I wish.”

He also added that he would need to buy more machinery to help him facilitate farming. He mentioned machines such as harvesting machines, pulverizing machines, cocoa pod breakers and many others. The sensitive farmer also cares about better working conditions for his workers.

“I need so many machines because as a farmer who has worked for more than forty years, I don’t need to be told how much my workers are suffering, therefore, to facilitate their work, the machines are very necessary for us.”, Mr. Odonkor said.

He added that owning a tractor would also go a long way to supporting him. Mr Isaac Odonkor also wept bitterly about how bad the road network from his farm to the city is. He described that it is so bad that even cars cannot go there and if he has so much to take to town like bags of cocoa beans, transporting them becomes very difficult.

The farmer has assured the government that if backed by sufficient funding, he will continue to work tirelessly harder than he has ever done to ensure he gets the best results. In the end, the farmer advised the youngsters to also engage in farming as it is very lucrative.

General Manager of Odonkor Farms, Mr. Maxwell Odonkor added his voice saying, “Our long-term vision is to set up a factory in our village that will turn our well-maintained cocoa beans into finished products like chocolate, cocoa. drink, cocoa powder and many other cocoa products”.

“Through the AFCfTA initiative launched by the International Trade Center and the Africa Trade House, we can easily export our finished products to other African countries and beyond. This will not only provide jobs for the people of Tadieso and its surroundings, but will also greatly contribute to increasing the country’s income since these finished products will also be exported to other countries,” the CEO concluded.