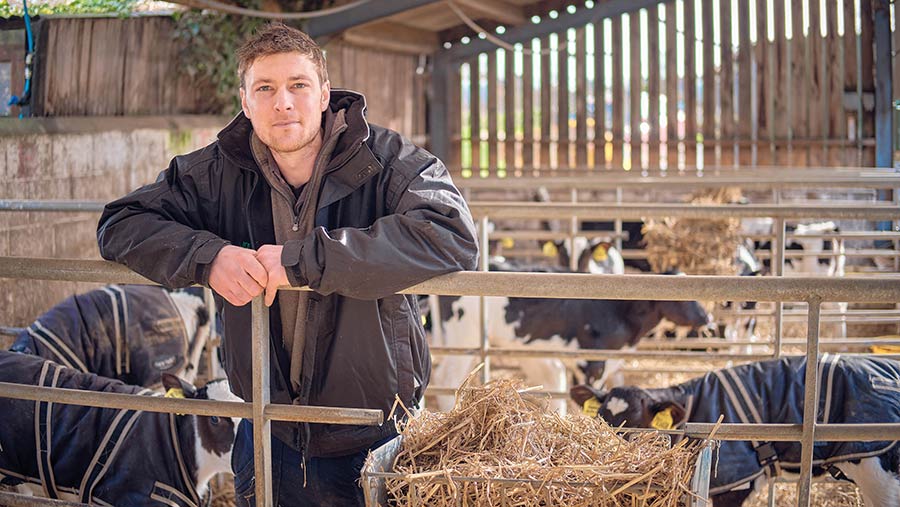 A focus on silage planning, harvesting and ensilage is helping a Wiltshire dairy farmer optimize feed utilization and reduce costs.

Joe Carter believes that you get from the cows what you put into them, and that performance is almost always tied to forage quality.

The 300-head herd at Carpenters Farm in Chippenham is housed year-round and fed grass and corn silage. A multi-cut approach to silage gets more milk out of the forage, Carter says.

The result of his grassland management is a reduction in concentrate use – from 11.5 kg per cow per day on the old system to 10.5 kg now.

The average total cost of food purchased is around 9.2p/litre.

Below, Mr. Carter talks about three areas he is targeting to further improve silage quality.

Forage is the biggest input cost to the farm, so planning to get the most out of it is key, he says.

In 2018, the farm made the decision to increase silage cuts from three to five.

“Historically, we were a three-cut system and used to graze the cows. But they’ve been fully housed for six years now and we’ve increased our cutting frequency to five through careful planning with our nutritionist Roy Eastlake.

The transition to a multicut system began a few years earlier and involved assessing and re-establishing grasslands across the entire farm.

This ensured they were all ready to be cut at the same time to simplify the silage process.

At the start of each year, Mr. Carter sits down with his nutritionist, agronomist and contractor to plan for the upcoming season.

“We are also starting to think about the next season at this stage in terms of culture and what we are going to put where.

“Having everyone sit together and come up with a lot of ideas has been really helpful.”

This planning meeting also involves setting a provisional date for the first cut with the silage company. The aim is for this to take place in early to mid-April, depending on the results of the pre-cut tests.

“It’s actually pretty easy, from a management perspective, to get a contractor sorted for mid-April because not many other people tend to be mowing the grass then. But I believe everyone should cut earlier.

Planning then involves going back from that date to calculate the number of fertilizer units to apply. The contractor is using wide flotation tires to allow for earlier travel, he adds.

Prior to the scheduled cutting window, the pre-cut test is performed. “It’s a really useful tool and basically puts the benefits of early cutting into numbers,” Carter says.

To confirm the cut, it aims for the following quality objectives:

The Carters have strict protocols at harvest time. These include the use of an oxygen barrier film when lapped and extra wide side sheets to ensure the clamp is properly sealed. Two tractors are used on the grapple, along with a compactor, to ensure that all the air is removed and the grass is as compacted as possible.

“We have a good relationship with our contractors, and they are also fully on board with our goals, which makes the process much smoother.”

After the clamp is completely filled, weighted nets and gravel bags are placed on it.

From then on, Mr Carter says they are aiming for later cutting intervals of four to five weeks – again, testing before doing so. “The goal is to have a claw full of consistent, high-quality silage to provide stable, high-quality feed to cows over the coming year.”

An inoculant is used during the ensiling process to preserve the nutritional value of the silage. The type of product depends on the dry matter of the grass when picked up. One provides aerobic stability in high DM grass silage (over 30%), while the other aids fermentation in low DM silage (up to 26%) .

Mr Carter says it is “a no-brainer”. “The science is clear [and] the cost of an inoculant – in terms of cost per ton when you’re silage making – is tiny compared to the yield you get. »

Waste management is a crucial part of food. The tarp is only removed every few days and the silage face is kept clean to reduce spoilage and waste.

“A lot of waste also results from bad silage,” he says. “We overfilled a maize grapple last year and now we’re seeing a lot more wastage than we’d like, which proved how important care is when harvesting.”

Clamps are also sampled monthly to keep an eye on quality. Grass silage is distributed as a daily ration together with maize silage and mixtures (see table below.

“The idea behind this is that we can ensure that the cow has the same bite of food – nutritionally speaking – every day of the year, which helps with the overall consistency of production.”

2022-04-18
Previous Post: How a young Serbian farmer became a hero in the revolt against lithium mining
Next Post: North Dakota farmer strives to be part of the big ag picture – Agweek